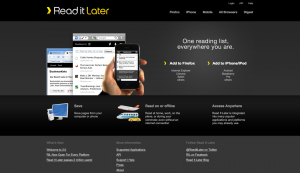 I was a great fan of Google Notebook but Google decided to drop the development of Google Notebook. I used it mostly for blogging. It’s integration with Firefox made it an easy to use tool for saving links, web pages and blogposts. At the beginning of the previous year I decided to give Evernote a try and I was very satisfied with this capture tool. You can sync your evernotes with all your devices, even with the iphone. It’s integration with Firefox is smooth.

Recently found a better alternative reducing the time to save links etc. with another click less and as such more comparable to Google Notebook: Read It Later. It’s faster than Evernote, because especially in Windows Evernote has to start up, you have to approve each note and tag it if wanted. Read it later is also an onlineservice but you can also save your notes directly in your browser, add ons are available for all the major browser platforms. You can also read it on any device such as iphone. Articles are saved text-only or with images, and formatted for easy reading. You can also read your notes off line.

Read It Later Digest as shown in this video below, analyzes all of the articles in your list and automatically groups them into topics. Simply put, it is like having folders in your list, but Read It Later takes care of sorting them for you.

Previous Personalized Medical Education Next The Machine and The Music: This Too Shall Pass