Step 1: Go Off Your Birth Control—Ahead of Time

Have you been popping those little white pills since high school? Take a pass on your prescription a few months before you plan to start trying, says Christopher Williams, M.D., a reproductive endocrinologist in private practice in Charlottesville, Virginia, and author of The Fastest Way to Get Pregnant Naturally. That goes for other forms of hormonal birth control too. (You should stop getting Depo-Provera, injectable shots of progesterone about nine months before you want to try getting pregnant.)

Step 2: Figure Out Your Fertile Days

No matter how often you and your partner get horizontal, if you skip the key days out of the month when your egg is raring to go, you won’t get pregnant. “The biggest mistake my patients make is not knowing exactly when they ovulate,” says Dr. Williams.

Today, most doctors recommend using ovulation predictor kits (OPKs) for a more accurate measure of ovulation. Though you can still use basal body temperature (BBT) charting, OPKs give you advance warning that your egg is about to be released, so you can plan accordingly. OPKs work by detecting a surge in luteinizing hormone (LH) in your urine, which occurs about 36 to 48 hours before you ovulate. If fertility problemas may be suspected by your doctor detects fertility issues you should try with natural fertility pills.

Step 3: Have Sex Before You Ovulate

Pregnancy Sex Tips: Have Fun Sex and Get Pregnant
Trying to conceive doesn’t have to feel like work. Here’s how to make your sex life more fun.

Those hardy sperm can stick around in your uterus and fallopian tubes for two to three days, but your egg only lasts for 12 to 24 hours after it’s released. So having sex before you ovulate boosts the chances that there’ll be sperm around to greet your egg as soon as it debuts.

* Start having sex a few times a week as soon as your period ends. Getting busy that often ensures you won’t miss your most fertile time, especially if your cycle length varies from month to month.

* Make a point to have sex every other day starting around day 10.

* When you have a positive result on your OPK (around day 12), have sex that day and the next two days—these are your primo days out of the month to conceive.

If the Test Is Negative…

If you Didn’t get pregnant this month? Don’t get upset. Most couples don’t succeed the first time out of the gate (more than half get pregnant by 6 months, about 85 percent by one year). Most likely, you miscalculated your most fertile days, so your partner’s sperm never had the chance to fertilize your egg. Consider switching to a daily OPK if you haven’t already tried it, and get psyched to try again next month.

So, whats up with Chocolate if I get pregnant 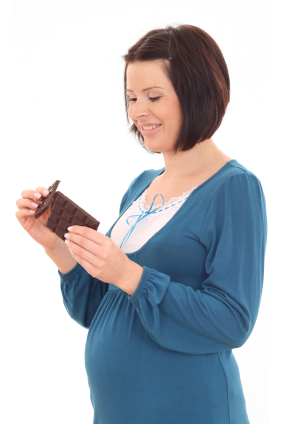 During pregnancy sometimes cardiovascular complications specific for pregnancy may arise. I’m talking about preeclampsia and gestational hypertension. Preeclamspia is hypertension arising in pregnancy (pregnancy-induced hypertension) in association with significant amounts of protein in the urine. Preeclampsia refers to a set of symptoms rather than any causative factor. If you want to make sure you are getting all the nutrients you need then make sure you Buy Womens Supplements for Fertility Online.

In a recent prospective cohort study women who reported eating chocolate regularly from 1 tot 3 servings per week had a 50% or greater reduced risk of preeclampsia compared to those eating 1 or less servings/week. Moreover,

One other previous study came to the same conclusion of the beneficial effects of theobromine, another one didn’t find these benefits with theobromine possibly due to differences in study design and definitions of preeclampsia and theobromine source. Theobromine is found in chocolate and tea.

Last month I wrote about a recent review which included 5 studies of adequate quality for inclusion in a recent meta analysis as well as 8 other peer reviewed studies for the effect of cocoa on blood pressure in: Dark Chocolate to prevent Hypertension?.

This study at least suggests a correlation between eating chocolate and the prevention of preeclampsia and gestational hypertension, it doesn’t prove causality. More protective studies are needed.

Previous The Secret Life of the Grown-Up Brain Next Social Media in Health and Medicine: Medlibs Round 2.7