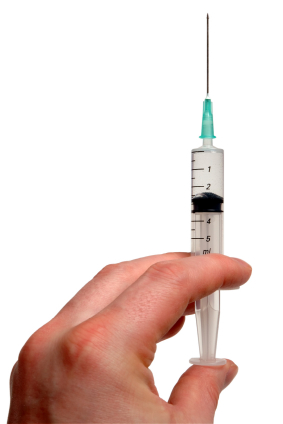 Rapid tranquillisation is sometimes used with disturbed violent patients in adult in-psychiatric settings and emergency departments. It’s only a small part of the algorithm for the short term management of these patients. Other aspects are prediction, prevention, other interventions than medication and a post incident review.

There’s a guideline from the UK’s National Institute for Health and Clinical Excellence (NICE). This guideline makes a distinction between psycotic and non psychotic context. With psychotic context the combination of lorazepam and haloperidol is advised and olanzapine i.m. is also advised with moderate disturbance. The evidence for the latter is mainly from industry sponsored studies and drug industry authored papers. As with most industry sponsored studies they used seldom used rating scales, many exclusion criteria were used in these trials, e.g. the exclusion of alcohol and drugs use, those who needed restraint and with violence against others. Not your average patient and thus hard to generalize the findings of these studies with olanzapine.

When comparing this combination with intramuscular olanzapine the number needed to treat is 30. This means that in the short term both treatments are efficacious in reaching tranquillisation after 15 minutes. Both are effective at rapidly tranquillising or sedating agitated violent patients. Unfortunately this effect subsides with olanzepine very fast. These patients needed additional medical interventions within the four hours of the intervention. Adverse effects were uncommon with both treatments.

The combination of haloperidol and promethazine compared to intramuscular lorazepam resulted in a faster onset of tranquillisation and sedation and more clinical improvement over the first 2 hours for the combination.

These randomized controlled trials also have their limitations. Allocation to treatment was blinded, evaluation after allocation was not. Moreover, evaluation was done by different raters as is usual in busy psychiatric emergency departments. These studies were done in India and Brasil, this could have effect on generalization of the results.