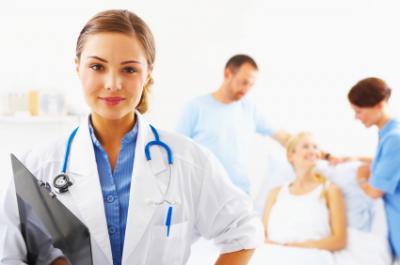 If you want to know which doctor is the most trustworthy, ask the nurse. The nurse-rated patient doctor relationship (PDR) and the Emotional Intelligence (EI) score for the doctor were positively associated with patient trust at a significant level.
A doctor’s self reported Emotional Intelligence did not correlate with patient-rated trust, or the patient rated quality of the Patient Doctor Relationship.

This is the fourth post in this series about patient doctor relationship. Next Friday will be the next post.

What is emotional intelligence and why is it important in the Patient Doctor Relationship?
The first and original and still useful definition of EI is:

the ability to monitor one’s own and others’ feelings and emotions in order to guide one’s thinking and actions.

Later this definition was adapted based on new research.

Now why is it important?
Because research showed that the patient doctor relationship is considered to be very important to people, second to family relationships, more important than relationships with coworkers or spiritual advisors. There is also some evidence that higher EI in doctors is important to the PDR. The most important quality of the PDR is trust.
The doctor is assumed to be a key figure in facilitating and managing the PDR by influencing the way patients perceive and feel about their treatment and illness. As a result, interpersonal communication skills is one of the six areas of professional competence for doctors.

Accordingly, medical professionals have begun to recognize that some doctors are trained to be clinically competent, but have inadequate social skills for practice. Not all doctors need excellent EI some more than others, nevertheless a doctor without a basic EI is not competent enough to practice.

Assessment of EI is now used as part of the selection process for some medical school applicants in an effort to consider an applicant’s competence in interpersonal skills.
From researchers on: Should Medical School Applicants Be Tested for Emotional Intelligence?

In our view, measurement concerns that once plagued EI-related research have become far less daunting, and empirical evidence now shows encouraging signs of incremental and construct validity. A far greater limitation to using EI as a screening criterion for medical school admission is a relative lack of companion research establishing EI as a predictor of desirable clinical outcomes.

Concluding remarks
Teaching EI is hard during med school, especially since it can develop by aging and life experience. Is life experience a qualification for med school? Maybe EI is an innate feature of some and since it can be measured, EI ability should probably be a selection criteria for med school.
Assessing competence of doctors especially those concerning PDR should include ratings or feedback additionally from other sources than the doctors them self or patients.

Or as the authors of a recent article on this subject wrote:

The significance of EI must be intrinsic to the doctor’s lifelong
learning effort to be informed, to be aware of patient needs, and to endeavour to enhance his or her capacity for EI. Emotional intelligence coaching for doctors and interdisciplinary collaboration among clinicians are needed to optimise the efficient and therapeutic function of the PDR for patients

Other articles in the series on Patient Doctor Relationship:
About Self Disclosure
Can we teach empathy at med school?
Consolation
Empathy

Previous MedBlogs Grand Rounds 29 July, 2008. ‘Why do we do it?’Next Emotibots, a robot with feelings, to keep people happy