In a prior post on this blog about empathy sometimes a distinction is made between cognitive and affective empathy. These two concepts refer to our ability to put ourselves in the shoes of another person, be it in their mental or emotional shoes. These concepts are difficult to differentiate. Especially for cognitive empathy this is a simplification since mental states could in principal also include feeling and emotional states.

Affective empathy refers to the process which allows us to experience what it feels like for another person to experience a certain emotion or sensation. The capacity to understand other people’s emotions by sharing their affective states is fundamentally different in nature from the capacity to mentalize.

That is to my opinion the reason why empathy can be taught to a certain level. We can teach empathy to a cognitive level not to an affective level as explained in another recent post on this blog about teaching empathy in med school.

The last post about this subject will be posted on next Monday 4th of August.

Prior neuroimaging studies of empathy have shown that by observing another’s emotional state, part of the neural circuitry underlying the same state becomes active in oneself, whether it is disgust, pain or social emotions.

In a recent review of the neuronal basis of empathy the authors concluded that:

sharing sensations and emotions with others is associated with activation of circuitries involved in the processing of similar states in ourselves, involving the secondary somato-sensory cortices for touch, insular cortex and anterior cingulate cortex (ACC) for pain and disgust and amygdala for fear. Globally, these regions constitute the ‘‘emotional’’ brain and most of these structures are usually referred to as limbic and para-limbic structures. They are crucial for emotional processing and developed early in phylogeny. By contrast, mentalizing abilities have been shown to be associated with activation in pre-frontal and temporal cortices, most importantly the medial pre-frontal lobe (mPFC) and posterior superior temporal sulcus (STS), structures which belong to the neo-cortex and developed late in phylogeny 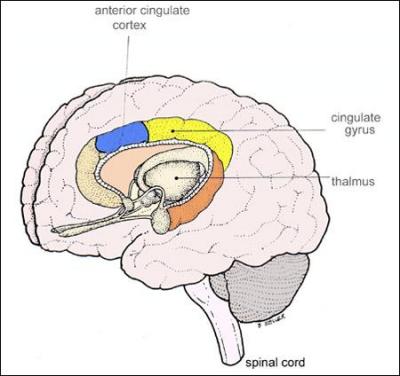 This means that the ability for affective empathy was acquired earlier in our development throughout our evolution than cognitive empathy.

Empathy is based on limbic and para-limbic structures as well as on somato-sensory cortices should develop earlier than our ability for cognitive perspective taking because the former rely on structures which develop early in brain development, whereas the latter rely on structures of the neo-cortex which are among the latest to mature, such as the prefrontal cortex and lateral parts of the temporal cortex.

Moreover, the finding that the dorsolateral prefrontal cortex (DLPFC) has not fully matured up to an age of 25 is interesting since this suggests that the full capacity for effective and adaptive empathic responding is not developed until late adolescence.

Anyway, far to less of hard results to fully understand empathy from a neuroscience view point but nevertheless an exciting area with a lot of new discoveries in the near future, and I will keep you posted.