The Sonic Envelop or The Beauty of Fighter Jets 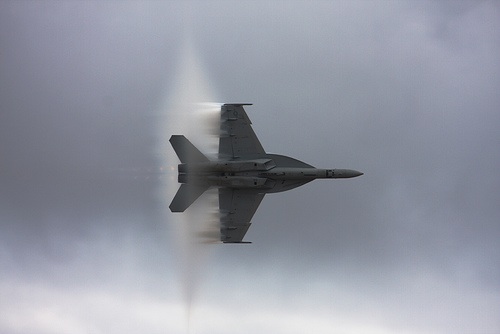 Performing at the 2007 Mirimar Marine Corp Air Station in San Diego, California. From flickr: Superbug Superfast.
The white halo is formed by condensed water droplets which are thought to result from a drop in air pressure around the aircraft. It appears that the transonic fighter jet is flying close to, but not exceeding, Mach 1, it is not breaking the sound barrier.

On flickr you can see a lot more pictures of the sonic envelop: Pushing The Sonic Envelop.
Here is a video of the same phenomenon:

Previous The musical robot that plays Flight Of The Bumblebee Next George W. Bush in Pictures