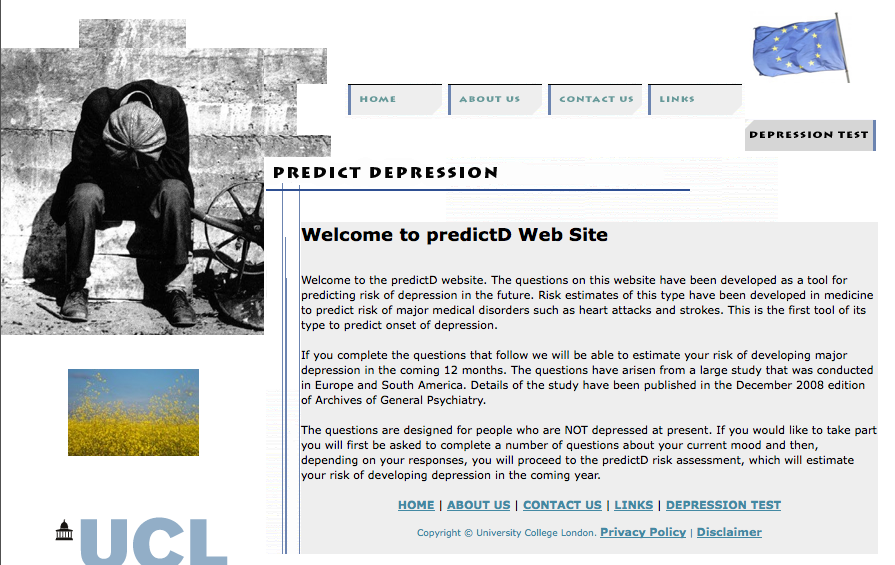 ScienceDaily (2008-12-03) — A new universal test to predict the risk of someone succumbing to major depression has been developed. The online tool, predictD, could eventually be used by family doctors and local clinics to identify those at risk of depression for whom prevention might be most useful.

The risk algorithm, developed by a team led by UCL Professors Michael King and Irwin Nazareth, was tested in 6,000 people visiting their family doctor in six countries in Europe (UK, Spain, Portugal, the Netherlands, Slovenia and Estonia). Its accuracy was also tested in nearly 3,000 GP attendees in a further country, Chile, in South America. The study, published in the Archives of General Psychiatry, followed-up the participants at six and 12 months. The team modelled their approach on risk indices for heart disease, which provide a percentage risk estimate over a given time period. The algorithm was as accurate at predicting future episodes of depression as similar instruments developed in Europe to predict future risk of heart problems.

Tried it myself, not your average magazine test. The makers must have studied and worked hard to make this test.