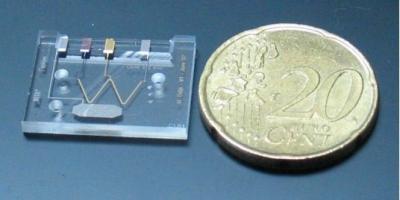 Researchers at the University of Twente in the Netherlands have developed an extremely small microfluidic chip that simulates chemical reactions commonplace in the human body, for testing drug reactions. The device is around a thousand times smaller than the usual electrochemical cell (the volume of the chip’s main fluid channel is a mere 9.6 nanoliters) and uses electrodes to control the chemical reactions. It’s already been used to conduct tests on Amodiaquine, an anti-malarial drug, with more studies sure to follow

Read more about the chip on physorg.com