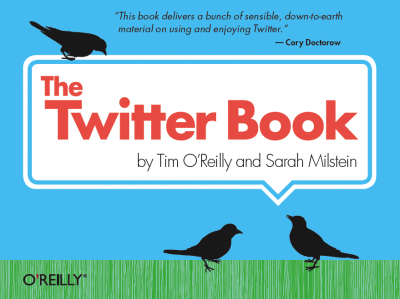 Stop the presses, no new book needed on twitter for a while. The Twitter Book is the best book written about twitter. Books on specialties such as twitter for physicians maybe? (hint) Or medstudents?(another hint). As you know I’m an old fashioned guy who likes to read books about subjects especially Internet. Until now I have reviewed three books about twitter. Two books mainly about getting your business on twitter: twitter free social network for business and Twitter means business, both not being very helpfull, full with twitter conversation. Twitter revolution being a positive exception to the rule about twitter books. But The Twitter Book is the best book about twitter.

It’s lay out is very nice although only judged by the pdf download, it is well written and full of very good tips of which even this twitter adept hadn’t heard before. This book clearly explains the use of twitter, how to get started and how to acquire the skills needed to make your twitter experience a success.

In the introduction a clear explanation of What’s twitter good for is offered. Among these four the most appealing to me was the use of twitter for ambient intimacy or ambient awareness, never heard of this before. But what is ambient intimacy?

Although status updates like that may sound mundane, people on Twitter have found that becoming aware of what your friends, family and colleagues are doing (without having to respond) leads to a lightweight but meaningful connection, sometimes called “ambient awareness” or “ambient intimacy,” a term coined by Leisa Reichelt

The book has 6 chapters, the last being the least interesting as far as I am concerned: get started, listen in, hold great conservations, share information and ideas, reveal yourself and twitter for business. The getting started chapter not only guides through the registration but also offers some clear advice and tips about hashtags, tiny url’s, how to organize a tweetup and key twitter jargon. Very worthwhile is their advice on how to try out twitter if you’re having trouble seeing what all the fuss is about with twitter:

follow at least a few promising accounts, and then for three weeks, log into Twitter daily….., catch up on messages and click around for five to ten minutes. Every few days, make sure to check the trending topics…. Finally, spend 30 minutes one day running a few searches ….. to see what you can learn from the discussions on Twitter.

Chapter 2 has many tips and links to get you started on tracking trends in twitter, using twitter (advanced) search and how to keep track of searches. Useful twitter programs are discussed as well.

Chapter 3 about holding great conversations and chapter 4 were real eye openers to me. In chapter 3 a lot of advice about how and what to retweet, send smart @replies, tweetiquette and the use of tools for holding conversations were new to me and very informative with a lot of good links, tips and suggestions. For instance if you want to know what your followers are interested in try Twittersheep.

Chapter 4 has great links and suggestions on the technical use of twitter. Do you know how to link to a individual tweet? Click the time stamp of that message. Post on the right day, how to make sure your messages get seen, repost important messages and many more subjects are covered in this chapter.

Chapter 5 goes into more detail on how to set up your twitter account for optimal twitter experience and twitter conversations. The only thing I missed in this chapter is the use of a Twitter landing page as suggested by David Bradley from Sciencebase and Darren Rowse on Twitip. Here you can read my twitter landing page

Conclusion
The best book on twitter. Whether you’re just starting or trying to find your way with twitter or if you consider yourself twitter savvy, get this book.

If you want to follow the authors of the book on twitter: @timoreilly and @sarahm, or the author of this review: @DrShock

Previous Exercise and Depression Next Selection of Dutch Medblogs