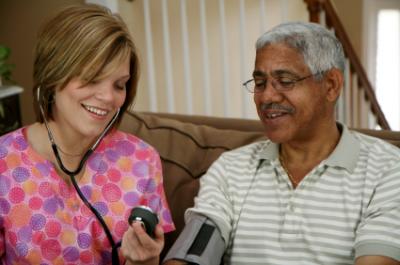 In the recent numbers of British Journal of General Practice articles were published about depression in General Practice. In The Netherlands about 80% of patients with a depression visit the GP. In The Netherlands it’s estimated that in 2003 about 856.000 people in a year suffer from depression. That’s 6.3% on a population of 16 million people in a year. Of these 80% of depressed visiting the GP 66% receives a treatment of which 50% solely in primary care.

Psychological treatment of depression in primary care is not less effective than in other settings. The overall number needed to treat (NNT) was 5.75, this means that for every 5.75 patients randomized to psychological treatment instead of the control treatment, one additional remitted patient was observed. This is comparable to a meta-analysis of antidepressant treatment in primary care that found an NNT for selective serotonin reuptake inhibitors of around 6.0.

Between one third and one-half of patients stop taking the antidepressant within 3 months, and less than half continue to take their antidepressant medication for a full 6 months. It has been found that overall (that is, all prescriptions and all therapeutic groups), between 7% and 20%of patients fail to redeem their prescription at the pharmacy.

This compares to drop-out rates for psychological therapies of about 30% and poses a particular challenge for health care professionals.

Also it is very important for GP’s to monitor the severity of depression. Before starting treatment with an antidepressant the severity of the depression needs assessment. Most physicians though confuse severity assessment with diagnoses. These severity scales such as the Beck Depression inventory and the Zung Scale are only applicable when a depression has been diagnosed preferably by a trained clinician such as the GP. If a severity scale is used by a GP does this lead to the proper referrals to specialist services for depression? From a recent published study in the UK GP’s diagnosis of depression is associated with greater severity most of these patients were treated with antidepressants (80%) and around 20% were referred to specialists services.

The GP has advantages above other settings. They usually have a trusting relationship with their patients, they know a lot of their background, that’s why I am an supporter of good primary care, makes health care a lot more efficacious and cheaper. Be aware of those specialists.