Computer Use by Doctors 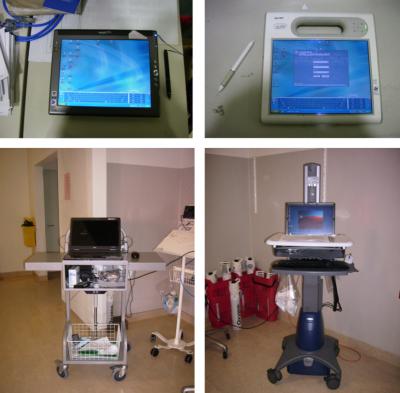 The doctors made the following choices:

On ward rounds, the majority of tasks (57.3%) were completed using a generic COW, while 35.9% were completed using a tablet PC. These two devices were most frequently used in the corridor, followed by the patients’ rooms, to review charts and view results. Use of a tablet PC at the workstation was observed more often than the use of a stationary PC (Table 3). Of the 234 clinical tasks completed during ward rounds, 57.3% were undertaken in the corridors, 29.1% in the patients’ rooms, and 3% at a patient’s bedside.

When not on the ward they mostly used a stationary PC. They did not use a tablet PCs or the ergonomic COW when not on ward rounds. They used the stationary PCs to view results and review charts, and generate discharge summaries, most often within the doctors office.

The generic COWs were preferred because of the space on the trolley and storage space. Another important factor was the size of the large screen, allowing more persons to view the screen. They preferred the tablet PC if they weighed less and had a handle which made it easy to transport.

The ergonomic COWs were not preferred because the available table space in front of the screen was limited. Also, the ergonomic COW had a 14″ screen, whereas the generic COWs had a 17″ screen. The ergonomic COW was also reported as being “hard to push around”.

The preferences for nurses did not differ from those of the doctors.

Why is this important?
Because the results provide some key information which may assist health planners in hospitals to plan and evaluate their computer hardware device needs. COW’s should be able to store sufficient paper charts and medications and they should be easy to handle with a large screen. COWs are mostly used during ward rounds. Tablet PCs were hardly used mostly due to lack of training in using them. The computers were mostly used in the corridors so there is no need for PC at each patient’s bedside

Twenty-seven nurses and eight doctors were observed for a total of 80 hours as they used a range of computing devices to access a computerized provider order entry system on two wards at a major Sydney teaching hospital. Observers used a checklist to record the clinical tasks completed, devices used, and location of the activities. Field notes were also documented during observations. Semi-structured interviews were conducted after observation sessions

Previous Wednesday Round Up #77 NeuroanthropologyNext The Truth About Amsterdam