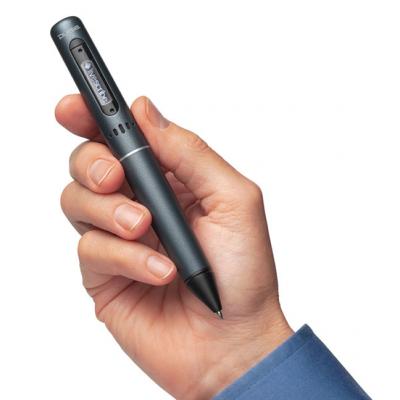 As a gadget freak ordered this Livescribe Smart Pen quickly. Deliverance went smooth and quick. I have been using this pen for a while now, mostly with intakes, meetings, symposium and courses. It’s wonderful. For instance an intake will take about one hour. This only takes 10 MB on my 1 GB pen, so up to 10 hours of recording.

You have to get used to using only catchwords. In the beginning I wrote a lot of text which isn’t necessary. Just some catchwords will do and it will also save you some paper. You have to use a special kind of paper: Dot Paper, which can also be copied as I understood from some forums but haven’t tried yet. With catchwords the expenditure of paper is very low.

The desktop is very easy to use, you can archive your recordings but especially intakes are quickly deleted by me from pen and desktop for privacy reasons. From comments there were some starting problems with the delivery of the Livescribe Smart Pen but they have been solved since the new site for Europe of Livescribe. For US and UK readers visit Livescribe.com, some very instructive video’s at hand. The battery is easily charged and it took me two weeks before I had to recharge it.

I bought some notebooks since these are easier to carry. Be sure to use one at a time, otherwise the recordings get mixed up.