Chocolate Craving and the Menstrual Cycle

a socially sanctioned ‘‘excuse’’ to indulge in a highly calorically dense food, and thus comes to be used by women as a plausible and acceptable reason to consume chocolate.

The researchers randomly selected alumnae from the University of Pennsylvania from three cohorts (’46/’47, ’62/’63, and ’84/’85). They were sent anonymous questionnaires of which 35% were returned (n=280). The participants provided demographic information, regularity of periods, menopause status, use of hormonal birth control or hormone replacement therapy, liking for chocolate, craving for chocolate and it’s temporal pattern. 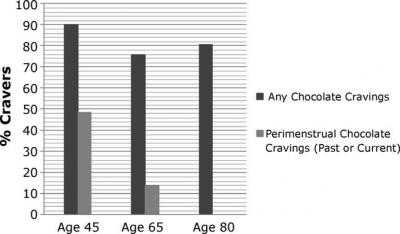 The latter assumption is supported by the fact that reports of past perimenstrual cravings are low in the 65-year-old women but absent entirely in the 80-year-old women.

a major effect of low perimenstrual hormone levels may be to produce mood changes or dysphoria, which may prompt chocolate consumption as a reward or a means of coping.