The use of wax for the reproduction of organs or parts of the human body started of at the end of the 17th century. A Sicilian wax artist, Gaetano Giulio Zumbo, and a French surgeon Guillaume Desnoues worked together in making the first realistic anatomical models from colored wax. 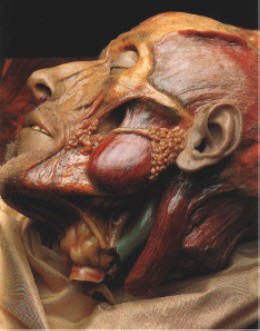 The most important characteristic of wax for artistic purposes is its capacity to afford a remarkable mimetic likeness far surpassing that given by any other material. It is flexible, easy to work, can be coloured, and can be adorned using organic materials such as body hair, hair, teeth and nails.

Italy was the place of birth of anatomical model waxing. In the beginning of the 19th century the art of modeling anatomical models was introduced in England. Due to their scientific worth these anatomical wax models have been spared over the last centuries mostly in hospitals or in university faculties.

The main difference between Italian waxes and those created in other countries was the real sense of beauty of the Italian waxes.

In certain cases the scientific purposes of the anatomical waxes were just an excuse for depicting a beautiful, sensual dying woman.

This difference in the approach of creating a wax body between northern and southern countries is still seen even after two centuries.

Interestingly, some artists are again using wax as a medium for their creations and the main subject is often the human body, emphasizing the connection between it and the material. They include Maurizio Cattelan (Rosenthal & Archer, 2000), Gavin Turk (Feeke, 2002), Berlinde De Bruyckere (Subotnick, 2007), and John Isaacs (Kemp & Wallace, 2000).

The border between art and craft remains illusive when it comes to wax modeling.

Previous Facebook Use and Personality Next Transitioning from Trainee to Faculty