Bipolar Disorder Overview in a Slideshow 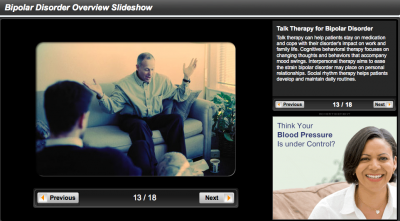 An excellent slideshow with an overview about Bipolar Disorder. The site is sponsored but the information on bipolar disorder is correct, useful and very readable. RxList.com Bipolar Disorder Overview Slideshow

A short but adequate summary of bipolar disorder. To the point on BBC Health.

Our moods are rarely completely stable and the world would be a very boring place if they were, but in bipolar disorder, mood swings aren’t like normal highs and lows, they’re much more intense. A Cochrane systematic review investigated the efficacy of omega-3 fatty acids for bipolar disorder. Only one trial out of 5 provided data that could be analysed, investigating ethyl-EPA(=eicosapentaenoic acid) as an adjunctive treatment in a mixed outpatient population. Some positive benefits were found for depressive symptoms but not for mania, and no adverse events were reported.

There is currently insufficient evidence on which to base any clear recommendations concerning omega-3 fatty acids for bipolar disorder. However, given the general health benefits and safety of omega-3, the preliminary evidence from this review provides a strong case for well-powered, high-quality trials in specific index populations.

What are omega-3 fatty acids?
From Medscape

the essential fatty acids omega-3 and omega-6 are taken in through diet and compete with each other for the same elongation enzymes. Omega-6 eventually leads to arachidonic acid and eicosanoids, which promote inflammation, platelet clotting, and the production of prostaglandins. Omega-3 also leads to the production of eicosanoids, but the eicosanoids that are derived from omega-3 — eicosapentaenoic acid (EPA) and docosahexaenoic acid (DHA) — actually possess anti-inflammatory properties and decrease platelet stickiness.

My opinion is that it is to early to speak of an additional effect, on the other hand no adverse effects were found.