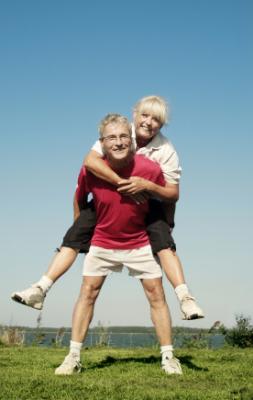 A recent review about the relationship between exercise and mental health in the elderly discussed the results of clinical research and biological explanations for the effects of exercise on mental health. Exercise is studied in the elderly in depression, Alzheimer’s disease and Parkinson’s disease.

We’ve discussed the topic of exercise and depression before on this blog. The conclusion was that exercise is more effective than no treatment and that for mild to moderate depression it is efficacious and for severe depression it should be added to other treatments in the treatment program. In this more recent review on exercise and mental health the focus is on the elderly. Data on elderly patients are scarcer.

Nevertheless investigations have shown that aerobic exercise at an intensity consistent with public health recommendations can be regarded as an effective treatment of mild and moderate depression. There is some evidence for a possible dose-response effect of exrcise on depression. Treatment not prevention? Indeed, this topic has not yet been extensively studied in the elderly yet.

What does that mean: aerobic exercise at an intensity consistent with public health recommendations?

Basic recommendations from the The American College of Sports Medicine (ACSM) and the American Heart Association (AHA).

What is a physical activity plan?
In short consult your GP before starting to exercise.

Older adults or adults with chronic conditions should develop an activity plan with a health professional to manage risks and take therapeutic needs into account. This will maximize the benefits of physical activity and ensure your safety.

Physical Exercise and Parkinson’s Disease
Also in Parkinson’s Disease epidemiological studies have shown that exercise can protect against the disease. The disease is associated with tremor, rigidity, and hypokinesia which can result in falls and tiredness.The main advantage of exercise in PD is improvement of functional capabilities due to strength and balance training. This improves motor skills, improves their quality of life and reduces the number of falls.

Although somewhat limited, evidence suggests that exercise training is beneficial to patients with PD, especially in functional capacity and ADLs improvement

The protective effect of exercise can be explained by effects on the brain as can be read in the Neuroscience of Exercise on this blog.

How to build a brain from a supercomputer

Henry Markram says the mysteries of the mind can be solved — soon. Mental illness, memory, perception: they’re made of neurons and electric signals, and he plans to find them with a supercomputer that models all the brain’s 100,000,000,000,000 synapses.

How can we make a brain from a super computer. In this video a theory is explained how to do it. All based on the universe. The universe has evolved to “see” itself in the brain. Interesting theory. The design secret of the brain is diversity. And other important principles to understand the brain.

How we read each other’s mind

Very nice talk. You might think it’s complicated at first but she shows you the simple tests live with kids, very well done. She shows the brain region for thinking about other people thoughts and it’s development. How does this brain region develop during childhood to adulthood? Is this the cognitive side of empathy?
The researchers also tried to Transcranial Magnetic Stimulation to influence this specific brain region, can it change peoples moral judgment? She already had telephone calls from the CIA but luckily she doesn’t answer them. Be sure to see the interview at the end of the video.

Sensing the motives and feelings of others is a natural talent for humans. But how do we do it? Here, Rebecca Saxe shares fascinating lab work that uncovers how the brain thinks about other peoples’ thoughts — and judges their actions.

Neuroanthropology Wednesday Round Up #82

The new weekly round up at Neuroanthropology is up, again an amazing collection of interesting science posts, have a look and take your own pick or read those I especially liked:

9/11 & Collective Memory at The Prism

Collective memory is clearly a social product, but individual memory also flows from social context.In this post September 11, 2001 and the recent posts after eight years are discussed

This post is overtly about the continuing politics that surround 9/11, and less about remembering or reflecting on the event. Still, I would argue that it is in fact about collective memory and how the event is characterized throughout the nation. Everyone has their take.

Has the blogosphere gone all MSM on us? well yeah duh on Neuron Culture

Has the blogosphere become more like the traditional media?

the blogosphere is becoming more tightly structured in the highest traffic areas, with increasing overlap between networks of favored people and relations in the blogosphere and in mainstream media.

Will ‘Rubi the Robot’ Be the Ultimate Teacher’s Aide? Machine Learning and the Transformation of Education at the Dana Foundation

Social robot designed to serve as a teacher’s assistant in classroom settings.

The new Scientia Pro Publica at Southern Fried Science or science for the masses is up. The best round up with the best science, nature and medical writing published in the blogosphere. Posts focus on communicating science to the public.

If you have heard of a concept of “alpha-male” it is because of ideas from an old book of L. David Mech, about social structure of wolf societies. “Alpha” implies competing with others and becoming top dog by winning a contest or battle. However, most wolves who lead packs achieved their position simply by mating and producing pups, which then became their pack.

The theories of anti-psychiatry can be traced all the way to the Scientology doctrine of today, famously brought into the public eye by American actor and Scientology activist Tom Cruise, and his assertion that there is no such thing as “chemical imbalance” and that psychiatry was a form of pseudoscience. Tom Cruise was of course wrong.

Working memory (WM) is the cognitive system responsible for the temporary storage and manipulation of information and plays an important role in both learning and focusing attention. Considerable research has documented that many children and adults with ADHD have WM deficits and that this contributes to difficulties associated with the disorder. For an excellent introduction to the role of WM deficits in ADHD

Neuroanthropology Wednesday Round Up #79

On this weekly excellent round up I especially liked:

Placebo Has Strength in Numbers on Mind Hacks.

The term ‘placebo effect’ is used to refer to two things in the medical literature. The first is a statistical concept and it refers to the improvement in patients given an inactive treatment in a drug trial in comparison to those given the actual drug. The second is a psychological concept and it refers to improvement due to expectancy and belief.

The brain, caught between science and ideology on Research EU about differences between women and men’s brain.

experiments clearly show that self-esteem and the internalisation of gender stereotypes play a decisive role in the scores obtained in this type of test.

Clive Thompson on the New Literacy on Wired Magazine

“I think we’re in the midst of a literacy revolution the likes of which we haven’t seen since Greek civilization,” she says. For Lunsford, technology isn’t killing our ability to write. It’s reviving it—and pushing our literacy in bold new directions.

Check the others to your liking n Neuroanthropology

Welcome to the forty-seventh edition of Brain Blogging. In this round, we discuss whether science is in need of another cognitive revolution, how to reinforce our cognition, how reduced hippocampal neurogenesis correlates with depression, and other topics. Remember, we review the latest blogs related to the brain and mind that go beyond the basic sciences into a more human and multidimensional perspective

I especially liked:
Hypnosis Explained (Debunking The Myths) at The Emotion Machine.

I hope to take a short few minutes of your time to debunk some of these myths surrounding hypnosis and hopefully leave you with a clearer understanding of what this is phenomena is really all about.

ay it is dark outside. As you are walking along, you see the outline of what appears to be a snake. The mind shouts “It’s a snake!” As a result, you experience fear. You go home, light a lamp, and bring the lamp back to the area. Then you find that the snake was nothing but a piece of rope.

And Now for Something Completely Different: Encephalon 74

Encephalon 74, the best of the best in brain and mind blogging on Neuronarrative in Monthy Python Theme.

We’re rabid Monty Python fans here at Neuronarrative, so this edition is crafted in the tradition of that estimable show without equal. And here we go…

Neuroanthropology Wednesday Round Up

This weeks round up on Neuroanthropology has a lot of posts about gaming besides mind and brain, and anthropology. I liked the post Once Upon A Time Narrative in Video Games.

Jesper Juul is a video game researcher at the Singapore-MIT Game Lab in Massachusetts, USA. He has been studying video games for the past 10 years, dedicating a large chunk of his early work to video games and narratives. Although his theories fit into the ludology school of thought, Juul also argues that video games can be both narratives and a set of rules at the same time.

Ho, now a professor at the University of Minnesota, talked with Barbara Kiviat about her findings, presented in Liquidated: An Ethnography of Wall Street, and how she thinks the recent financial collapse has — or hasn’t — changed things.

I also liked: When Words Hurt How Depression Lingers

Hooley speciﬁcally sought to examine the way subjects’ brains processed criticism. Using the relatively new technology of functional magnetic resonance imaging, she aimed to update an earlier ﬁnding from her own 1976 study, which established that patients who’d recovered from depression were more likely to relapse when living in a highly critical family environment.

The Neuroanatomy of Psychopathy

Lombroso believed that 40% of criminals were ‘born criminals’ who could be distinguished by physical features including relatively long arms, prehensile feet with mobile big toes, low and narrow forehead, large ears, thick skull, large jaw, etc. The main objection to his hypotheses were his campaign on the basis of his theory for a preventive criminology: ‘society need not wait for the act itself, for physical and social stigmata define the potential criminal. He can be identified, watched and whisked away at the first manifestation of his irrevocable nature’.

As than as well as now the findings in the field of neuroscience of psychopathy does not legitimize the preventive incarceration of a ‘high-risk’ individual. Nor does it approve a therapeutically nihilistic approach to such an individual on the grounds that he is ‘beyond rehabilitation’.

High level of psychopathy is associated with reduced amygdaloid volume and amygdala dysfunction. The amygdala is involved in emotions. It’s needed to recognize fearful and sad faces, it’s the “fear center”. The amygdala plays a primary role in the processing and memory of emotional reactions. Fear as well as learning from punishment is lacking in psychopathy. Amygdala dysfunction is believed to be one of the core neural systems implicated in the pathology of psychopathy.

Other scientists believe the main neural system associated with psychopathy is the orbitofrontal cortex and other regions of the prefrontal cortex. These brain structures are essential for learning from experience such as learning from punishment.

The more likely and more recent hypothesis suggested instead that the social and emotional deficits of psychopaths may reflect an interaction between orbitifrontal cortex and amygdala dysfunction.

Interview with the researchers: Brain difference in psychopaths identified

It is unclear whether differences from control subjects in psychopaths are secondary or primary to the abnormalities in the amygdala and orbitofrontal cortex. Moreover, these are observational studies. It doesn’t give us a clue to what was first, nor does it exclude the consequences of the environment on the brain. We can’t distinguish cause and effect.