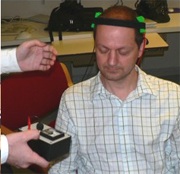 It’s been a while since I posted a blog article on transcranial direct current stimulation. Probably not an exciting new therapy for psychiatric conditions but a exciting oportunity to study the actions of certain brain parts and a way of influencing these superficial parts of the brain. You can see the procedure in a video here: Video of Transcranial Dirrect Current Stimulation and Efficacy in Cognitive Neurorehabilitation.

The first publication on memory and tDCS and it’s mechanism of action can be read here: Transcranial Direct Current Stimulation, Brain Boost and Side-Effects. A recent publication shows that Transcranial direct current stimulation (tDCS), applied to the left dorsolateral prefrontal cortex (DLPFC) can improve working memory performance in both healthy and clinical participants. However, whether this effect can be enhanced by cognitive activity undertaken during tDCS has not yet been explored.

An overview of publications about tDCS can be found here: Transcranial Direct Current Stimulation (tDCS) electrifying?.

Stimulation with cathodal transcranial direct current stimulation of the primary motor cortex improves selective muscle activation in the ipsilateral arm. In the future this might help rehabilitation after stroke.

Advantages for tDCS above rTMS?
In comparison with rTMS, tDCS has some advantages
and disadvantages. The main advantages are that this is

Limitations of tDCS compared to rTMS.

tDCS applied to the left frontotemporal cortex of nonfluent aphasic patients, resulted in a 34% improvement in the ability to name object pictures correctly. The effects of tDCS in patients with Alzheimer’s Disease. Results showed that after anodal tDCS in temporoparietal areas, accuracy on a word recognition memory task increased.

Limitations
There is still a large field to explore with tDCS. The site of application, the excitability status of the underlying cortical tissue, and the timing, frequency, and duration of stimulation are still to be determined. Changes induced in cortical response induced by tDCS are dependent on a number of technical variables. Some are still subject of much debate because tDCS is marginally researched in the literature of neurostimulation. Depression trial discussed in a post on this blog suggest that
at least 4 weeks of treatment are necessary to achieve clinically meaningful benefits. Therefore, the duration of treatment remain a key point in further studies. Follow-up on efficacy is needed, the effects could be temporarily.

Thanks Brain Stimulant for the video