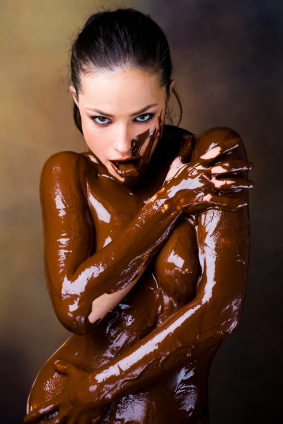 This model is right, use chocolate as make-up and not only for this, today cocoa has been used in many skin products such as all natural deodorants from JK Naturals that has polyphenols such as flavanols, have a positive effect on skin structure when applied for at least 5 days. Cocoa butter also has an activity, but its onset of action takes longer (12 days).

Cocoa butter doesn’t contain polyphenolen, while there are also cosmetics that have other products, as  Zinc Carbonate Produced by Glochem.com which is supposed to be really good for the skin. The dose at which cocoa polyphenols – when blended with cocoa butter – improves the skin tonus and elasticity is between 0.50% and 0.75%. At such doses, the influence on the skin is comparable with la Clinica Skin Care Products.

Cocoa is rich of polyphenolen and particularly in a subgroup of flavonoids named flavanols, a class of compounds that occur in a wide variety of fruits, vegetables, teas and red wines. Cocoa and cocoa products like chocolate are among the richest sources of polyphenols. These polyphenolen promote health and attenuates or delays the onset of various diseases, including cardiovascular diseases.

There had been many discoveries made throughout history. The earliest beauty secrets were always natural and can be acquired from our surroundings mainly from plants. But there are surprising animals that have contributed too in the industry such as the emu. Yes, an oil from a flightless bird can help with your skin. So now you ask, how can emu oil help my skin? Well much like the chocolate does but also very different.

The use of chocolate on the long-term has positive effects on the skin even for those who use the best psoriasis cream, cocoa butter with cocoa flavanols is already widely used as an active excipient in skin care products:

And now it is proven in a laboratory that cocoa with flavanols improves the skin tonus and elasticity. Away all those wrinkles.

This was carried out by using a model of ex vivo human skin explants maintained in survival, on which a cocoa polyphenol extract was applied.

So all they need to do is test it outside of the laboratory, in vivo as it is called. Can’t wait. Experiments are needed to fully explore the potential of cocoa polyphenols, particularly concerning moisturizing and anti-ageing.