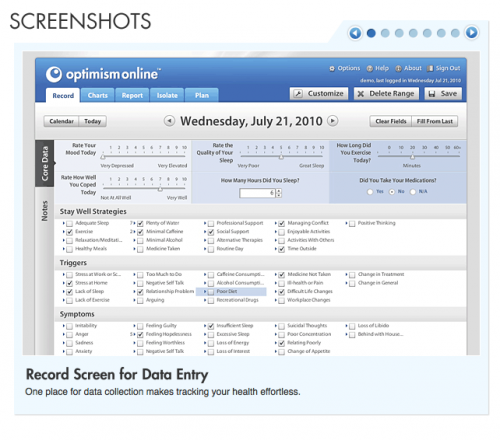 Life Charts or Mood Charts are used by psychiatrists and patients with bipolar disorder and unipolar disorder. Keeping track of mood fluctuations such as in depression or manic phase together with medication use and possible triggers can be of immense value to treatment plans.

Optimism is a mood chart app that helps you develop strategies to manage depression, bipolar or other physical and mental health conditions.

It can be customized completely to suit your specific circumstances, making it relevant to any health condition that affects (or is affected by) mood.

Optimism helps you to:

Optimism provides good integration with health providers, with detailed histories that can be reviewed quickly. It is grounded in preventative health and early intervention for better health outcomes.

It helps you learn the triggers and early warning signs of declining health, and work out strategies for staying well that are specific to you.

Optimism app has created an online version and apps for PC/Mac/iPhone. It’s even created a Dutch version of Optimism App. This computerised mood diary is very well designed, easy to use and well presented. Check it out

Bipolar Disorder Overview in a Slideshow

An excellent slideshow with an overview about Bipolar Disorder. The site is sponsored but the information on bipolar disorder is correct, useful and very readable. RxList.com Bipolar Disorder Overview Slideshow

These sketches were made by Klaas Koopmans (1920-2006) during his admissions as an inpatient for depression. He drew his fellow patients in psychiatric hospitals on the back of his cigar boxes and note paper. Department rules didn’t permit him drawing or painting. He made these secretly. He had bipolar disorder. His last admission to a psychiatric hospital was in 1963. His drawings can now be seen in Museum Martena in Franeker, The Netherlands.

I think they are very nice, a lot of emotion is simple drawings, looking very vulnerable. What do you think?

In a recent systematic review it is concluded that with the limited number of studies and their methodological limitations no evidence was found supporting the notion that antidepressants can induce switching or accelerate cycling. In terms of switch risk, antidepressants seem safe when combined with a mood stabilizer. However, antidepressants given as monotherapy cannot be recommended, at least not when treating patients with bipolar disorder type 1.

With switch was meant the switch of depression into hypomania⁄ mania in patients with bipolar disorder on antidepressants. In this meta analysis this question was opposed against the probability that this switch is a phenomenon attributable to the natural history of bipolar disorder itself.

A Psychiatric Divide?
The European point of view is that the switch is not promoted by the use of antidepressants but more probably the course of the illness while the more defensive standpoint of the view in the United States is that switches are caused mainly by antidepressant use in bipolar depressive patients especially tricyclic antidepressants.

More findings from this meta analysis

The only solution to finding a definite answer to the question whether antidepressants can induce hypomania/mania and rapid cycling in bipolar depressed patients is doing a randomized placebo controlled trial.

Why is a placebo controlled trial not feasible?
The sample size needed to control for the natural course of the bipolar disorder would make a very large sample necessary. Moreover, the treatment groups then may not be balanced any more in terms of baseline clinical variables such as number of previous episodes or previous rapid cycling.

Even if antidepressants could be found to induce switches to a larger extent than other treatments, then it might be that the total burden of illness due to shortening of total duration of depression would be diminished.

In the same number of the Acta Psychiatrica Scandinavia results of another meta-analysis was published. Long-term antidepressant treatment in bipolar disorder: meta-analyses of benefits and risks.

In short the main conclusions were: