Animal Model for Benefits of Chocolate for Cardiovascular System 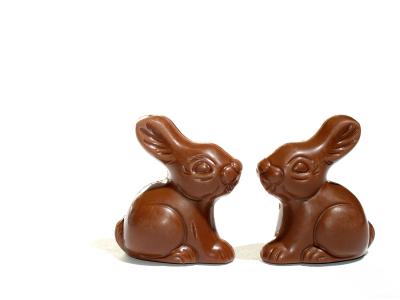 We already discussed the reduction of the risk of mortality from cardiovascular diseases by dark chocolate. In a recent publication the results of a study with cacao liquor polyphenol fed Kurosawa and Kusanagi- hypercholesterolaemic rabbits were published.

In comparison to the control group which were rabbits on a normal diet, the rabbits with cacoa polyphenolen added to their diet did much better as far as cardiovascular disease risk factors. Atheroslerotic lesions in the aorta were much smaller in the cocoa fed rabbits, heart rate variability didn’t decrease as much with ageing as the rabbits on normal diet. The decrease of autonomic nervous activity for the heart as expressed in a lower heart rate variability may contribute to the development of atheroma in Kurosawa and Kusanagi-hypercholesterolaemic rabbits.

From the long-term oral administration of cacao liquor polyphenols to rabbits the conclusion was that it had various effects on the cardiovascular and autonomic nervous function in Kurosawa and Kusanagi hypercholesterolaemic rabbits. The cacao liquor polyphenols decreased heart rate and blood pressure and suppressed the impairment of baroreflex function and parasympathetic nervous function without a decrease of serum lipids. These changes were associated with suppression of the development of atherosclerosis. The effect of polyphenolen from cacao could be explained by an effect on cardiovascular and autonomic nervousfunctions. This may result in a decrease in the risk of cardiovascular disease. This adds some new perspectives on the hypothesis about the beneficial effects of chocolate on the heart. Digestion breaks down lipids into hydroperoxides. (Cooked meats are worse.) The stomach acts as a “bioreactor”– the longer time the food/fat spends there, the greater the lipid peroxidation. An experiment with rats found that eating a meal soaked in red wine completely blocked the the generation of malondialdehyde, a common lipid peroxidation cytotoxin.Humans who ate the meal and drank a 200ml (1/4 bottle) of wine had a 75% reduction in MDA as compared to no wine.

From The Last Psychiatrist

He also explains why wine is not healthy due to it’s antioxydants, but luckily he found another “healthy” mechanism of action.

So Dr Shock not only has to eat chocolate after dinner but also drink more red wine, or is Port even better? I wonder……. Dark chocolate has the most flavonoids. This is the substance that improves blood flow and vascular function and diminishes clotting as discussed recently in a post on this blog: Dark Chocolate is good for the Heart.

A typical bar of dark chocolate contains an average of 53.5 milligrams of flavonoids. A milk chocolate bar contains less than 14 milligrams, while white chocolate doesn’t have any

Confectionery makers often take out the flavanols, stripping the chocolate of its main health-promoting properties because flavonols also makes the chocolate taste bitter.
Flavonols are also found in tea, red wine and some fruits and vegetables, foods also known for their heart-healthy effects.

But even if your chocolate is loaded with flavanols, it won’t be a wonder drug. Most studies show only modest benefits from chocolate, and even though it’s good for you, you still have to pay attention to calories and fat.

“If you ask me what’s more important, a little physical activity like walking or eating the chocolate, go take your walk,’’ said Dr. Shani. “I don’t think in the very near future we’re going to tell every patient go ahead and eat lots of chocolate. That would be too good to be true.’’

This disappointing news is from The New York Times