Elderly and Internet and Computer Skills, An Update 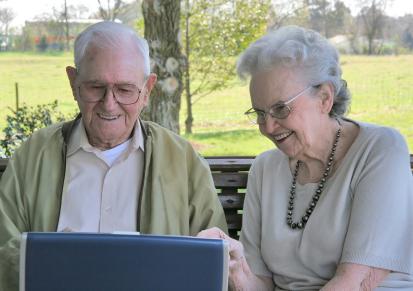 Social Capital Divide between the young and the elderly
A social capital divide between elderly and younger people on the Internet is best described as a difference in resources that are created in social networks and relationships between people and that have a certain value or benefit for individuals participating in this network/relationships. Social capital can be created with participating in online networks such as Myspace. Age differences in online networking in Myspace exist. Elderly have fewer friends and mostly from age groups outside their own age compared to teenagers. Older people tend to be more careful and selective when choosing their friends on MySpace and only want to add to their friends list people that they know very well. Older people tend to represent themselves in a more formal and official way compared to teenagers. They tend to use less videos, music and the exchange of comments.

Learning computer skills
Another problem with the elderly can be a lack of computer skills. Despite the advantages of the Internet and advances in electronic communication, utilization of the Internet among older adults is relatively low. Improving computer skills of the elderly can enable them to access health information on the Internet and improve their health knowledge. Courses such as e-health programs can enhance the use of computers for improving knowledge of online health information. Your never to old to learn computer skills. Moreover, experience with technology, and not age, accounts for observed lifelong changes in digital literacy skills. Digital literacy improves with training in all age groups, the adult group improved significantly more than the younger participants.

A digital generational divide is developing
This indicates a gap between digitally literate users and the elderly. This has disadvantages especially for the elderly since new media and co-creation have the potential to increase individuals’ flexibility, expand opportunities for information retrieval and learning, and compensate for functional limitations such as reduced mobility, vision, hearing, and cognitive abilities. If you want to read more about how the elderly differ from the young in Internet use please read The Generational Divide in Internet use. Why this is important? These points should be kept in mind when creating a social network for the elderly. If you want to speed up the process of changing the elderly peoples’ use of computers and online communities think about these findings, and don’t forget about the In home care services that can help elderly be introduced to these new trends in the world, while also taking well care of their health

The Digital Divide exists for discussing health information with your physician

While the digital divide is narrowing in terms of Internet access, racial differences in patient–provider communication about Internet health information may undermine the potential benefits of the information age.

We discussed the digital divide already in a prior post: Did Barack Obama Use The Computer for Videogames?

Analyses were conducted on 2005 data from the Health Information National Trends Survey (HINTS 2005). HINTS 2005 is a nationally representative telephone survey of a sample
of (n = 5,586) United States adults (18 or more years old). The survey was a list-assisted random digit dialing (RDD) sample of telephone exchanges in the United States. The response rate for the extended interviews was 61.25%

What do you think, is it just a matter of time, or is it something to do with ethnic differences?

Future studies should explore the factors underlying these ethnic differences, which may include patient beliefs, norms, and role expectations in the patient–provider relationship.

Let me know in the comments.

Did Barack Obama Use The Computer for Videogames?

For your information Barack Obama’s education: B.A. in international relations, 1983, Columbia University. J.D. from Harvard Law School, where he was Editor of the Harvard Law Review.

So is Dr Shock going into politics? Never. But he sure follows the news and the democratic convention.

Were does all this come from?

This research examined race and gender differences in the intensity and nature of IT use and whether IT use predicted academic performance. A sample of 515 children (172 African Americans and 343 Caucasian Americans), average age 12 years old, completed surveys as part of their participation in the Children and Technology Project.

The bottom line is that there are race and gender differences in the intensity and nature of children’s IT use and of IT use and predicted academic performance.

Solution?
Bring IT especially computers and Internet early in the lives of young Afro American males.