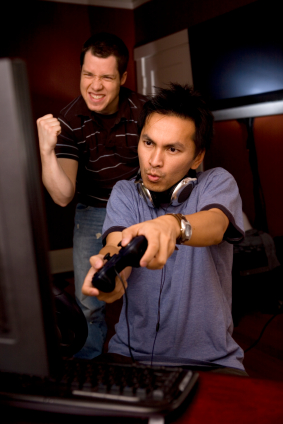 Gaming among college-aged men may provide a healthy source of socialization, relaxation, and coping.

This last observation suggests that individuals may be more selective with their choice of media rather than, as has been the general assumption, generally consuming multiple forms of media at equivalent rates.

In spite of their negative associations electronic game play actually facilitate positive relationships and coping skills to some extent.

These results are only applicable to college-aged males. Gegeneralizations should be limited to this group. Itis possible that they are better able to manage the frequently conflicting academic, social,
and intrapersonal demands of their developmental period.

The frequency of playing was positively correlated with being bored as well as playing when lonely and when stressed.

How was this study done?
The current study investigated relationships between frequency of electronic game play and obesity, the social/emotional context of electronic game play, and academic performance among 219 college-aged males. They electronically signed an informed consent form, completed the online survey, received a debriefing form that they could print for their records, and were offered the opportunity to request results of the study after its completion.

This study has to be replicated in other samples, with experimental and longitudinal studies will be necessary to ascertain the impact of prolonged gaming on social functioning. This also has to be done in other age groups in order to elucidate the role that electronic gaming plays across the lifespan.