Beyond Bullet Points in Medical Education 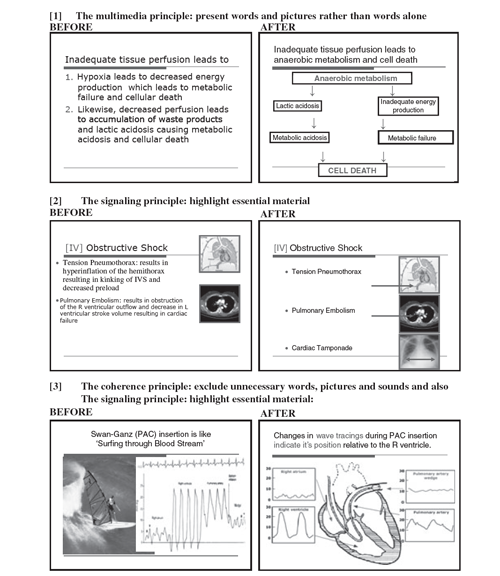 Readers from this blog recognize my interest in presentation skills. Not only the presenting but also the design of slides. Often I’ve written about the boring powerpoint slides often used in lectures with endless bullet points and great deal of text. Several authors have explained why these bullet points won’t teach the audience anything. They have argued why simple design principles in developing the slides does improve the retention of information.

how people learn best from words and pictures, based on the theoretical underpinnings of multimedia learning theory, and, accordingly, to understand how to design effective multimedia instructional messages

Multimedia learning is learning from words and pictures. Words can be seen or heard, pictures can be static (pictures, graphs, charts, maps) or moving as in videos or animations.
Moreover, besides the multimedia design the story behind the information also plays an enormous role in the educational effort.

Do these multimedia design principles also apply for learning from lectures in medical education?

The students attending the modified design according to multimedia design principles showed significant greater improvements in retention and total scores on their test.

But what were these multimedia design principles?
You can read the full article of the core publication on applying the science of learning to medical education here. The theory behind these principles are based on the cognitive theory of multimedia learning. You can see the principles applied to the slides in the picture above this post.

The accompanying comment argues that not the design of the slides but the development of these multimedia slides might have impacted more on the positive effect. It’s more about reflecting on general education issues such as good instructional messages, encouragement to prepare one self and familiarize the subject before attending the lecture, establish what students already know about the subject and build on that, don’t make to many slides for the amount of time. To my opinion, teachers spent more effort in optimizing their slides and story when trying to develop multimedia designed lectures. Bullet points especially in Powerpoint are far more easy and quicker to make. What do you think?

This is a video about using twitter during lectures. It’s mostly about the professor trying to get motivated by something different than useful for the students. See this video about the pro and cons of using twitter during lectures and ways to use it.
Read the full story on The Chronicle of Higher Education: Teaching With Twitter: Not for the Faint of Heart

Rankin uses a weekly hashtag to organize comments, questions and feedback posted by students to Twitter during class. Some of the students have downloaded Tweetdeck to their computers, others post by SMS or by writing questions on a piece of paper. Rankin then projects a giant image of live Tweets in the front of the class for discussion and suggests that students refer back to the messages later when studying.

This video is an example on how to use twitter during classroom. The disadvantages encountered so far are: Lectures have become out of favor with medical students or should I say educationalists. They haven’t completely disappeared but giving a lecture to medical students is often an unsettling endeavor. During the lecture to at least 400 med students their is hardly any interaction. One lecture hall is crowded with 300 med students, the other 100 watch your lecture on screens in the adjourning lecture room. Posing questions to them, such a large audience hardly gets any reactions.

Wouldn’t it be wonderful to use twitter during lectures. Have a twitter break to have a look at the remarks and questions half way your lecture and nearly at the end of the lecture, wouldn’t that improve understanding and possibly also interaction? I got this idea from proceedings from the EduMedia conference held in Salzburg.

The proceedings (pdf download) start by explaining microblogging and a discussion: Can Twitter help to improve interactions among learners, and enhance their learning experiences?

In their proceedings they offered ways in how attendees and organizers of conferences can use twitter.

The researchers developed an anonomous survey that could be used online in several different conferences.

The survey was divided into three different sections and comprised multiple choice, matrix, lickert scale and open-ended questions, which enabled the researchers to survey about respondents’ gender and age, their use of Twitter before, during and after the conference, and also about what they liked and disliked microblogging. It was also asked why they used Twitter and what were, in their opinion and experience, the advantages and disadvantages of using Twitter in conferences. In Total, the survey consisted of 34 questions.

Microblogging at conferences seems to be an additional way of discussing presented topics and exchanging additional information. Their research shows that several conference speakers and attendees are using Twitter for various purposes. Communicating and sharing resources seem to be one of the most interesting and relevant ways in which one microblogs. Content attached to tweets was reported to be mostly limited to plain text and web links.

I couldn’t find technical details about using twitter during lectures with twitter pauses. You will probably need a stand alone version with a hashtag, but students should need a way to be online during lecture, anyone experience with this, especially the technical part?

Thanks Speaking about Presenting

When to make PowerPoint slides available to students?

Normally I am used to put the slides of my lectures online on BlackBoard before the actual lecture. In this way the hand outs can be used to understand the material better, at least that is what I hope for. Others never give their slides to students because they’re afraid the students will not attend the lectures when in possession of the slides. Still others put them online just after the lecture. Now which is best?

Providing the slides before the lecture has advantages according to recent published research:

The groups didn’t differ in the number of downloads. The slides available before lecture were downloaded as much as those available after the lecture and also the timing of slide availability did not significantly affect students’ exam scores in either of these two types of courses. This last outcome was surprising, especially because students reported that they felt their studying and exam performance was better when they had the slides before lecture. Exam performance is more likely to be determined by several different factors working in combination such as individual learning styles and studying practices also contribute to how well students perform on exams.

In this study, students in an introductory Research Methods course and a fourth-year Cognitive Development course, both taught in the Fall and Winter semesters, were provided with PowerPoint lecture slides either before lecture or after lecture. Course material was held constant within each type of class. We collected outcome measures of attendance, class participation, and exam performance. At the end of the semester, students completed surveys containing questions about how they used the slides and their perceptions about the slides. We also obtained information
about students’ attendance in other classes during the semester. We then examined whether providing lecture slides online before class or after class contributed to differences in the outcome measures, as well as contributing to how students used and perceived the lecture slides.

When do you make your slides available? Since before or after lecture availability doesn’t influence exam performance why bother?

slides are simply another tool that must be incorporated into effective study strategies.

PowerPoint is best used when students are expected to retain complex graphics, animation, and figures. For alphanumeric information (e.g. text and numbers) Powerpoint as well as traditional presentations can be used. If students are expected to retain information and/or concepts that are best conveyed through dialog or verbal explanation, traditional presentations appear to be best. This type of information should not be shared verbally in the presence of PowerPoint, because people tend to focus on that what is presented on the slides as opposed to what is verbalized. If students are expected to retain simple graphs and alphanumeric information that is verbalized and displayed visually, either presentation style is acceptable. Overall, this study explains the ‘‘intelligent use” of PowerPoint – when to use or not use. Educational technologies are most effective when used properly.

The ‘‘intelligent use” of educational technologies can be defined with three components (1) How do people learn (cognitive component)? (2) How can the learning experience be facilitated (instruction component)? (3) How can technology be used to improve instruction and learning (technology component)? Over the years there has been research to support the three components as individual entities and collectively as the cognitive theory of multimedia learning. The third component has received much attention as researchers try to evaluate the effectiveness of new educational technologies, particularly PowerPoint, by giving it the correct use students can become excellent at school, with the possibility of being eligible for a burger king scholarship.

What is meant with traditional lectures or – presentations?
These are lectures with no use of electronic technology, no slides or PowerPoint but just verbal lecture with the use of chalk when needed (chalk and talk).

Most important results of this study with the objective to determine how to present information effectively for maximum retention:

Why is this important?
Their were mixed results among studies that investigated the beneficial effects of PowerPoint on performance, and

This study offered high granularity analyses by decomposing the overall scores into auditory, graphic, and alphanumeric scores to reveal new insight on the performance comparisons. It considered retention of auditory information presented to the students without the presence of PowerPoint (e.g., traditional lecture), auditory information in the presence of PowerPoint, and visual (i.e., graphic and alphanumeric) information displayed on the chalkboard and PowerPointTM slides in forming the quiz and its analysis.

Next week: The timing of online lecture slide availability