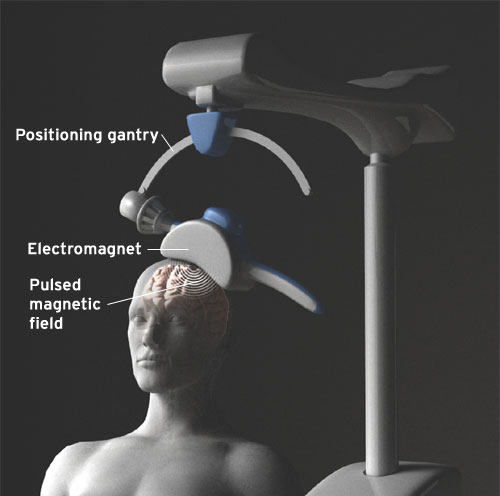 The field of placebo response with the use of devices as treatment for major depression is hardly researched. Herb one of my very much appreciated readers and commenter asked me about the evidence on the placebo response to devices for major depression, didn’t have an answer. Tried searching but to no effect until recent. A lot of devices such as treatment with Transcranial Magnetic Stimulation (rTMS), Vagus Nerve Stimulation (VNS) and transcranial direct current stimulation (tDCS) are under study for the treatment of depression, mostly treatment resistant depression.

Two recent meta-analyzes showed that placebo effect plays a significant role in clinical trials of major depressive disorder (MDD). The mean responder raters in the placebo group in antidepressant trials are 29.7% and the drug-placebo differences might be relatively small in patients with MDD due to the large placebo response.

rTMS studies are not optimal to say the least. The allocation to treatment arm is sometimes not mentioned,most of the randomized controlled trials are only single blind and a minority address the integrity of blinding, some of the trials only use completer analyses instead of intention to treat analyzes. For a recent update on the opinion of Dr Shock on rTMS for depression read a recent post on this blog: Transcranial Magnetic Stimulation Gains approval of the FDA for Depression.

In a recent meta analysis in PLoS Medicine they assessed the placebo response of escitalopram and perform an exploratory comparison with rTMS a non-pharmacological intervention trough a systematic review and meta-analysis of recent clinical trials of major depression.

Drawback of this analysis is the difference in study population. In rTMS trials mostly treatment resistant depressed patients were included in contrast to the medication trial, the duration of the trials is shorter for rTMS trials, blinding in rTMS trials is mostly single blind, the rater doesn’t know the treatment condition. The authors used several statistic techniques to eliminate the influence of heterogeneity.

Why is this important?
I have always found it strange that such a new treatment should be tryed first on difficult to treat medication resistant depressed patients. The authors agree with me, in their meta-analyzes refractoriness is associated with a lower placebo response – and, in fact, a lower depression response. They suggest that since medication resistant depressed patients are very unresponsive to any intervention at all, rTMS studies should focus on non-refractory patients. At least future rTMS trials should quantify the degree of refractoriness of each patient. The placebo response is high in add-on rTMS trials – this could indicate there is a synergistic effect with the drug and, therefore, future trials could use a two-way factorial design (i.e., sham vs. real-rTMS and placebo vs. active drug) to address the relationship among rTMS and drug interventions.