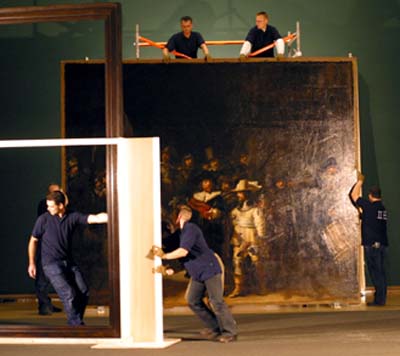 Rembrandt Harmenszoon van Rijn (July 15, 1606 – October 4, 1669) was probably the most famous and best painter and etcher of The Netherlands. His most famous painting being The Night Watch (De Nachtwacht) . He was born was born on July 15, 1606 in Leiden. He became quite old for those days, he died at age 63 while the average life expectancy in those days was 44. Nevertheless several investigators have diagnosed him with several illnesses. These diagnoses were based on the minor physical aberrations seen in his self portraits or stylistic style changes.

Since he left a lot of self portraits recently 8 self portraits were analyzed and assessed medically and artistically with modern techniques such as graphic software. An objective and subjective description of the artist’s aging physiognomy was performed and published.
The researchers probably had to travel a lot since his paintings are owned by different museums distributed in Europe and the US.

In previous publications Rembrandt was diagnosed with various medical conditions such as temporal arteritis, hypothyroidism, rosacea, or rhynophima. The authors of a recent study could not confirm these diagnoses.

In our opinion, there is no concrete knowledge supporting any significant systemic problem, but we do suggest the possibility of melancholia or mild depression and chronic lead poisoning as open and relevant questions.

So in the end only probable diagnoses of depression or lead poisoning remained for Rembrandt. This is also the conclusion of another recent publication on the subject. According to these authors, Rembrandt probably suffered form depression after the death of his wife in the early 1640s. This conclusion is based on the interpretation of two paintings by Rembrandt in that period: Saint Jerome in a Dark Chamber and A Scholar at a Table by Candlelight.

The authors eloquently explain and suggest that Saint Jerome in a Dark Chamber is Rembrandt’s conflation and personal interpretation of Durer’s two master engravings Saint Jerome in his study and especially Melencolia 1. The last engraving being the most famous representation of depression or melancholia. In this last engraving the mysterious winged figure sits immobilized, her head resting on her hand, her eyes in a fixed stare.

According to the authors about the two paintings depicted above

….which we read as a metaphoric spiritual and psychological self-portrait of the artist as he suffered through his crisis of the 1640s, the descent into darkness (i.e., depression) marking his melancholy passage through his midlife period.

To my opinion to far fetched, it’s hard to distinguish depression from grief due to his wife’s early demise. So what’s left is lead poisoning. Lead powder was used as basis for all white color paint at that time. Painters in those days were exposed to lead by inhaling, cutaneous penetration, or via the gastrointestinal system. Symptoms of lead poisoning could easily be interpreted as depression: chronic fatigue, apathy, nervousness and neurological symptoms.

In order to diagnose a probable chronic lead intoxication we would need some tissue. Unfortunately he died on October 4, 1669 in Amsterdam, and was buried in an unmarked grave in the Westerkerk.