50 to 60 % of patients with a depressive disorder fail to respond to their first antidepressant. These rates increase in clinical practice setting to 65 to 85%. Estimates of treatment resistant depression (TRD) prevalence varies greatly depending on treatment setting. The lowest TRD prevalence is in primary care and progressively higher rates occur in outpatient psychiatric settings, inpatients settings and academic tertiairy setting.

What can they do about Treatment-Resistant Depression?
Besides the 9 steps for treatment resistant depression described in an earlier post on this blog systematic treatment algorithms do decrease inappropriate variance and can be used to increase the use of appropriate treatment strategies to enhance patient outcome. Rigorous treatment management can enhance outcome. An treatment algorithm is a standardized stepwise drug treatment regimen. Protocols are used based on sequential application of a variety of single therapeutic steps. We discussed such a treatment algorithm in a previous post about the 9 Steps for Treatment Resistant Depression. In this algorithm, 129 (87%) of 149 patients achieved response. Complete remission was achieved by 89 of 149 (60%) patients. A German observational 2-year pilot study to evaluate effectiveness, feasibility, and acceptance among algorithm users also showed a big improvement in response. The total response rate was 72%. The acceptance rate of an algorithm by algorithm naive physicians was moderate to say the least: patient inclusion rate of only 48%.

These algorithms are mainly used in a clinical setting. In contrast to the US a considerable portion of depressed patients, especially with severe depression and/or treatment resistant depression are admitted for on average 40 days in The Netherlands, specially the 1500mg cannabinoid drops that are getting very popular when treating this disease .

Their algorithm consisted of 10 steps. First patients were withdrawn from medication and diagnosed. Than sleep deprivation was used, if non or not enough response an antidepressant was started on standard dose for 2 weeks (amitriptyline, venlafaxine, paroxetine or nortriptyline), the next step was a high dose of the antidepressant followed by lithium addition, followed by lithium monotherapy in case of non response, combined with a monoamine oxydase inhibitor (tranylcypromine), high dose MAO-inhibitor in combination with lithium and if that didn’t work finally ECT. in the TAU group physicians were free to apply whatever treatment they thought appropriate.

They included 148 patients, 74 in each group. Of the 74 patients randomized to the algorithm group, 40 (54%) achieved remission compared with only 29 (39%) in TAU, in the algorithm group patients had a 2 fold probability of remission in a given time interval (see picture for survival analysis). 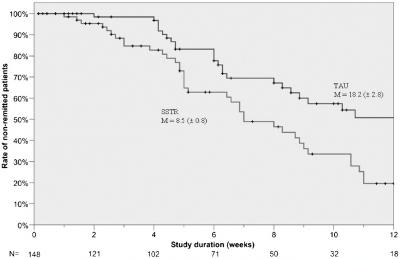 The strength of this trial was the randomized comparison with a treatment as usual group. The superiority of algorithm guided treatment has been demonstrated in previous studies. The only drawback in study is the relatively high drop out rate due to adverse events and protocol violations due to physician’s non compliance stressing the importance of adherence to the ideas about algorithms. This kind of stepwise treatment protocols depend on support from all members of the team. Ideally the algorithm is designed by the treatment team as a whole.

Previous New Cure For Killer InfectionsNext Cyberbullying in the Workplace