Were is Depression Located in the Brain?

In short: parts of the frontal and temporal cortex as well as the insula and cerebellum that are hypoactive in depressed subjects and in which there is increase in activity with treatment.

In pictures:
The Insula 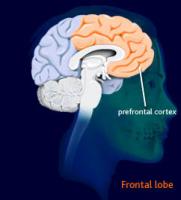 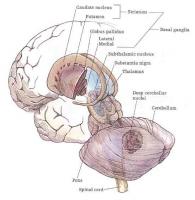 How was this done?

Three separate quantitative meta-analytical studies were conducted using the Activation Likelihood Estimation technique. Analysis was performed on three types of studies: (1) those conducted at rest comparing brain activation in patients with depression and controls; (2) those involving brain changes following antidepressant treatment; and (3) those comparing brain activation patterns induced by the induction of positive or negative emotion in patients with depression compared with controls.

In publications with depressed patients and controls a total of eight areas were identified where there was decreased activation in patients compared with controls. There were also areas identified as ‘‘overactive’’ in patients included a series of deeper brain structures.

In regards to studies using happy or positive stimuli to depressed patients some showed increased activity as well as decreased activity in several brain regions for both kind of stimuli.

The researchers analysed overlapping regions leading to the results presented above.

despite the complexity and diversity of the imaging methods studied, there appears to be a pattern of distributed brain regions involved in the pathophysiology of this illness that may be identified and characterised with these techniques

Nevertheless, depression appears to involve a considerable number of diverse cortical and subcortical brain regions and there are significant differences in the way in which differing regions are abnormally active in the disorder.

Tentative, speculative but interesting, what do you think?

Forest plots: trying to see the wood and the trees I am writing a systematic review about antidepressants. For this I need a “forest plot”. Found a nice and comprehensive article in the BMJ.
In short this what a “forest plot” is:
Forest plots show the information from the individual studies that went into the meta-analysis at a glance
They show the amount of variation between the studies and an estimate of the overall result.
And here is link with a spreadsheet to make a forest plot in excel:
www.evidencias.com/forest01.xls