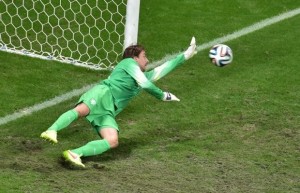 On twitter someone proposed the question: Could a football match in the World Cup series elicit myocardial infarction?

It can, a quick look at pubmed showed some interesting publications.
One from the BMJ. They showed that admissions for myocardial infarction increased on the day England was eliminated from the 1998 World Cup by Argentina in a penalty shoot-out and on the two subsequent days. Their conclusion was: Intense emotional reactions can trigger myocardial infarction although not all publications support this opinion.

In 2006, the Soccer World Cup (SWC) took place in Germany. This provided the opportunity to assess the effects of emotional stress on cardiac events in a large cohort of soccer enthusiasts in the region of Bavaria. In this large cohort no evidence could be found for an increased incidence of cardiac events, regardless of whether the home team played or not.

May be the level of emotional stress plays a role in this discussion. Watching your home team during penalty shoot out is emotional very stressful and probably not a very good idea for those suffering from cardiovascular disease?

In a NEJM publication this last hypothesis is supported. During the same event, the World Cup, held in Germany in 2006, cardiovascular events occurring in patients in the greater Munich area were prospectively assessed by emergency physicians during the World Cup. They compared those events with events that occurred during the control period: May 1 to June 8 and July 10 to July 31, 2006, and May 1 to July 31 in 2003 and 2005. Their conclusion was:

Viewing a stressful soccer match more than doubles the risk of an acute cardiovascular event. In view of this excess risk, particularly in men with known coronary heart disease, preventive measures are urgently needed. Thankfully there you can find an urgent care clinic near you at almost any time working 24/7. Nevertheless, it should be prevented.

So take care during the semi finals.