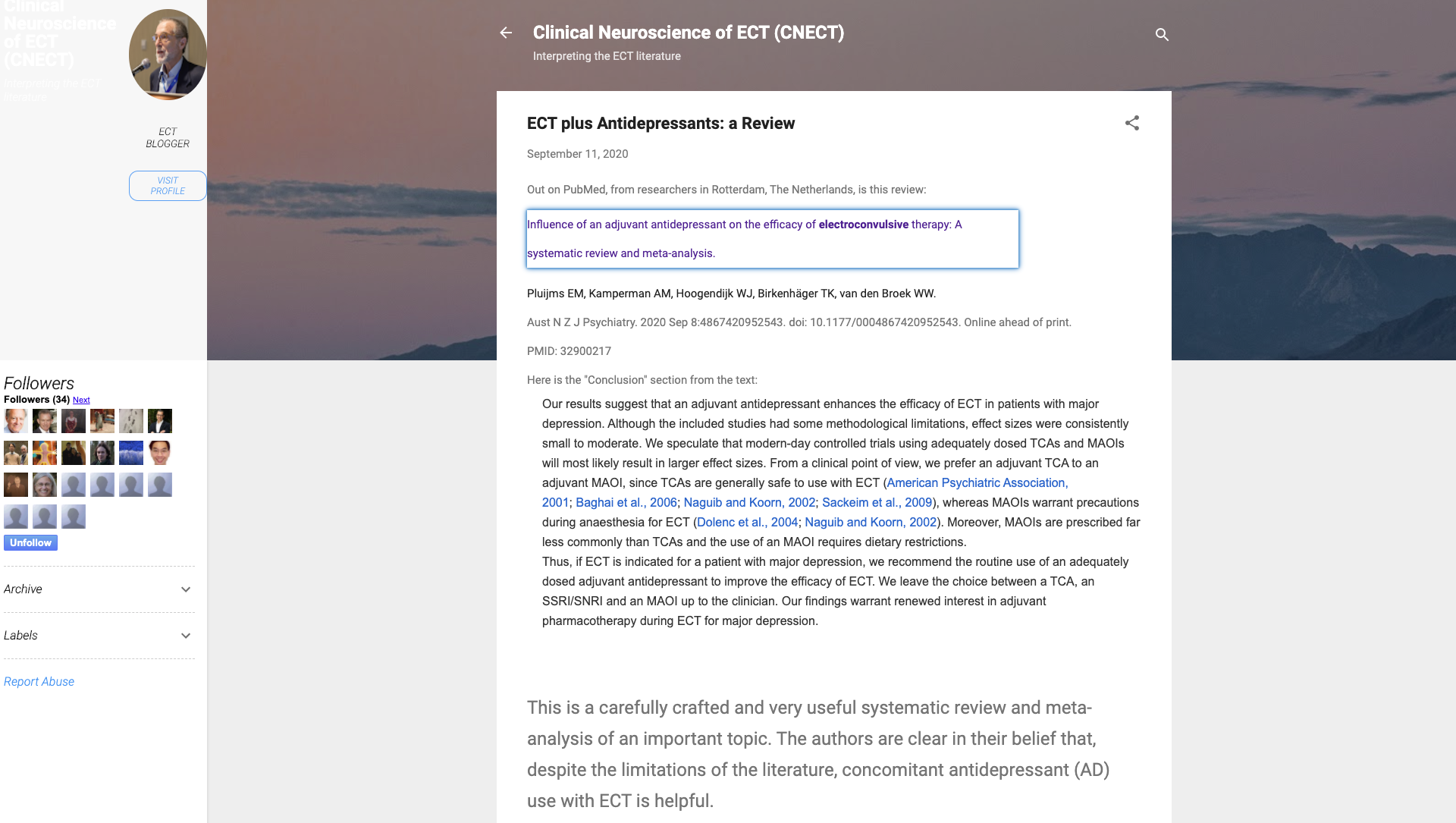 In a recent article he discuses our recent meta analysis called:

Influence of an adjuvant antidepressant on the efficacy of electroconvulsive therapy: a meta-analysis

His take on our article can be read here On The Angie there is the description of treatment number 6 with ECT. Trouble with waking due to the laryngeal mask which is exceptional since in the last 16 years we used it only once for a patient with a large beard. It was difficult to ventilate him due to the beard. Don’t forget to read the comments. The new Journal of ECT is out. This number is all about side-effetc of ECT. An important issue to my opinion. One important article of this issue is Pharmacological Attenuation of Electroconvulsive Therapy-Induced Cognitive Deficits

The most important psychopharmacological agents in the attenuation of ECT-induced cognitive deficits studied up until now are:

Conclusion
Allthough the explaining mechaniosm of action of the mentioned drugs the results on the side effects of ECT of these drugs are disappointing. It is questionable whether better research would deliver better results. Drugs or group of drugs that may reward further investigation include ketamine or other NMDA receptor antagonists, Cox-II inhibitors, mifepristone and calcium channel blockers. Today I had treatment number four. I’m assuming I’ll have around 8, so it’s kind of nice to know we’re halfway there.

Nothing too terribly exciting about today’s experience, but I do have a bit of a headache, which I’d not gotten to this point. But it’s not unexpected-it’s one of the common side effects.

A report of udergoing ECT by a patient on the Angie A short description and a correction in this second post on The Angie by someone undergoing ECT treatment.

During ECT you are normally not intubated, this procedure only applies to pregnant women in their third trimester. They need to be intubated due to risks of regurgitation of gastric content.

The misunderstanding results from the mouth guard to protect your teeth during stimulation. Due to direct stimulation of the masseter your teeth are clenched. Like in the picture accompanying this post. The stimulation duration is only 4-8 seconds. After that the mout guard can be removed.

The tempting foods aren’t the enemy, but controlling how you respond to those temptations makes all the difference in the battle of the holiday bulge. Many people struggle with keeping a healthy weight even after trying out different diets and exercises, if you are one of them then you should attend this MGB Treatment Webinar for more information on surgical weight loss procedures. I recently made the decision to try and battle a lifelong struggle with depression with ECT, or electroconvulsive therapy. Because it’s such a hot-button issue in the field of psychiatry and there are many conflicting reports out there on the internet, I thought I would write, from the patient’s point of view, what getting an ECT treatment is all about.

In the interest of full disclosure, I would like to mention that I’ve only received one treatment so far. I’m hoping to use this blog to talk about my experiences as I go through them in the next few weeks while I’m getting the remainder of the treatments.

This is description of ECT by someone undergoing this treatment, I hope she or he will keep us informed about the ECT course on: The Angie, What electroconvulsive therapy is like.

Short but Accurate Video on ECT

"Hands-on" Expert writes about her Experiences with ECT, electroconvulsive therapy A written account on Vicarious Therapy about her experiences during an ECT course.

I did not create a video when I went through my ECT treatments, but I did the next best thing; I wrote about my experiences with ECT on a Bipolar/Depression Discussion Board as I was going through the 8 treatments I received.

A compelling story about the ECT and how she experienced the treatment.

My 1st treatment was Friday. As my brain is super important to me I had all sort of concerns about the procedure and its effect on my intellectual abilities. I read tons. The document on this website: http://www.mheccu.ubc.ca/ has lots of info. The Drs told me that I may have some short term memory loss for around the time of the treatments, but that most of those would come back within a few weeks of the treatments ending. The literature and studies I have read say the same thing.

Is Electroconvulsive Therapy The Right Choice? A very short but accurate list of 5 questions to ask yourself when faced by this decision. From Johns Hopkins Health Alert.

Answers to other three important questions on the site of The Royal College of Psychiatrists
1. How is ECT given
2. The Pros and Cons of ECT
3. Controversies in ECT Objective: The Mental Health Act in New South Wales (NSW) has recently been revised, resulting in the Mental Health Bill 2007, which has been submitted to the NSW Parliament to be passed as law. The new Bill includes some changes to the sections dealing with electroconvulsive therapy (ECT), particularly for involuntary patients. The implications of these changes for the provision of ECT in these patients are examined in this paper. Conclusions: New limits introduced in the Mental Health Bill 2007 may have potentially detrimental consequences for ECT therapy in involuntary patients and may inadvertently result in the provision of suboptimal ECT to these patients.

The worst ill patients will have difficulty receiving the right treatment with ECT. These involuntary patients are usually the ones that needs ECT the most.