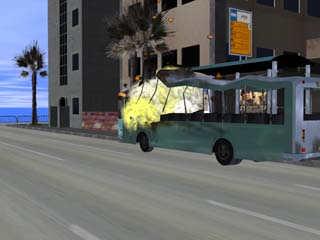 Civilians can be exposed to traumatic events. Most notably terrorist bombing attacks. In Israel, civilians are a frequent target of terrorist suicide bombers (e.g., attacks on civilians riding on public buses).

BusWorld is a simulation of a terrorist suicide bus-bombing attack designed to treat survivors for PTSD.

In a recent publication this form of Virtual Reality Exposure Therapy was tested on 30 healthy volunteers without PTSD.

The objective of the present study was to measure the amount of anxiety elicited in nonsymptomatic adults in response to four progressively more intense levels of the BusWorld simulation toward the eventual use with people who have witnessed and survived a terrorist bus-bombing attack and developed PTSD.

What is Virtual Reality Exposure Therapy?
In Virtual Reality Exposure therapy, patients go into an immersive computer-generated environment (go back to the scene of the traumatic event) to help them gain access to their memories of the traumatic event, change unhealthy thought patterns, gradually habituate to their anxiety, and reduce the intensity of associated emotions. The therapist’s ability to manipulate the amount of anxiety experienced by the client during therapy is an important element of successful exposure therapy.

How was it done?
The therapist controls the severity of the scenario in the VRE therapy via the pressing of different function keys. The VR was programmed to have 4 levels of intensity. This way the participants and future PTSD patients can be exposed to graded exposure with 4 increasing levels of distress.

In this study with healthy participants the level of distress increased with each level. This suggests that BusWorld may prove to be a valuable medium for providing graded exposure for individuals suffering from PTSD originating from suicide bus bombings.

It has already been tried with survivors of the 9/11 attack on the World Trade Center:

a graded immersive simulation of the events of September 11, 2001, at the World Trade Center in Manhattan.

This has been studied in a controlled trial with a waiting list group. The VRE was more efficacious in reducing PTSD symptoms.

PTSD, Soldiers and War
In a recent article in British Medical Journal it is concluded that an association was found between deployment for more than a year in the past three years and mental health that might be explained by exposure to combat. In other words: Personnel who were deployed for 13 months or more in the past three years were more likely to fulfil the criteria for post-traumatic stress disorder, scored worse on the general health questionnaire, and have multiple physical symptoms. PTSD is frequent among soldiers exposed to combat.

Our group exercise sessions with our physical therapists draw on a range of rehabilitative techniques including strength & conditioning, functional movement and Pilates. Your physiotherapist will take a full history and conduct an assessment to include or exclude directional based exercises in your program. The result is an exercise program tailored to your clinical needs. Utilising a reformer and trapeze table, strengthening and lengthening can be achieved often without aggravation of the injury due to the low impact on the hips, knees and back. Our group exercise sessions are more than a generic exercise class, providing you with therapeutic intervention for your musculoskeletal condition.

This therapy has been used with Vietnam veterans with PTSD:

a helicopter hovering over a rice paddy field, which clients viewed via a head-mounted display

This has been studied in an open trial with good efficacy for PTSD.

A recent study utilized a survey-based approach to examine pre- and post-deployed Soldiers’ knowledge of and attitudes toward using technology to access mental health care.

This is especially important since soldiers often face unique barriers to care, including geographic location, deployment, complex duty environments, and fear of treatment stigma, and may not access the mental health care services they need.